Nike 2002: the greatest tournament that never was 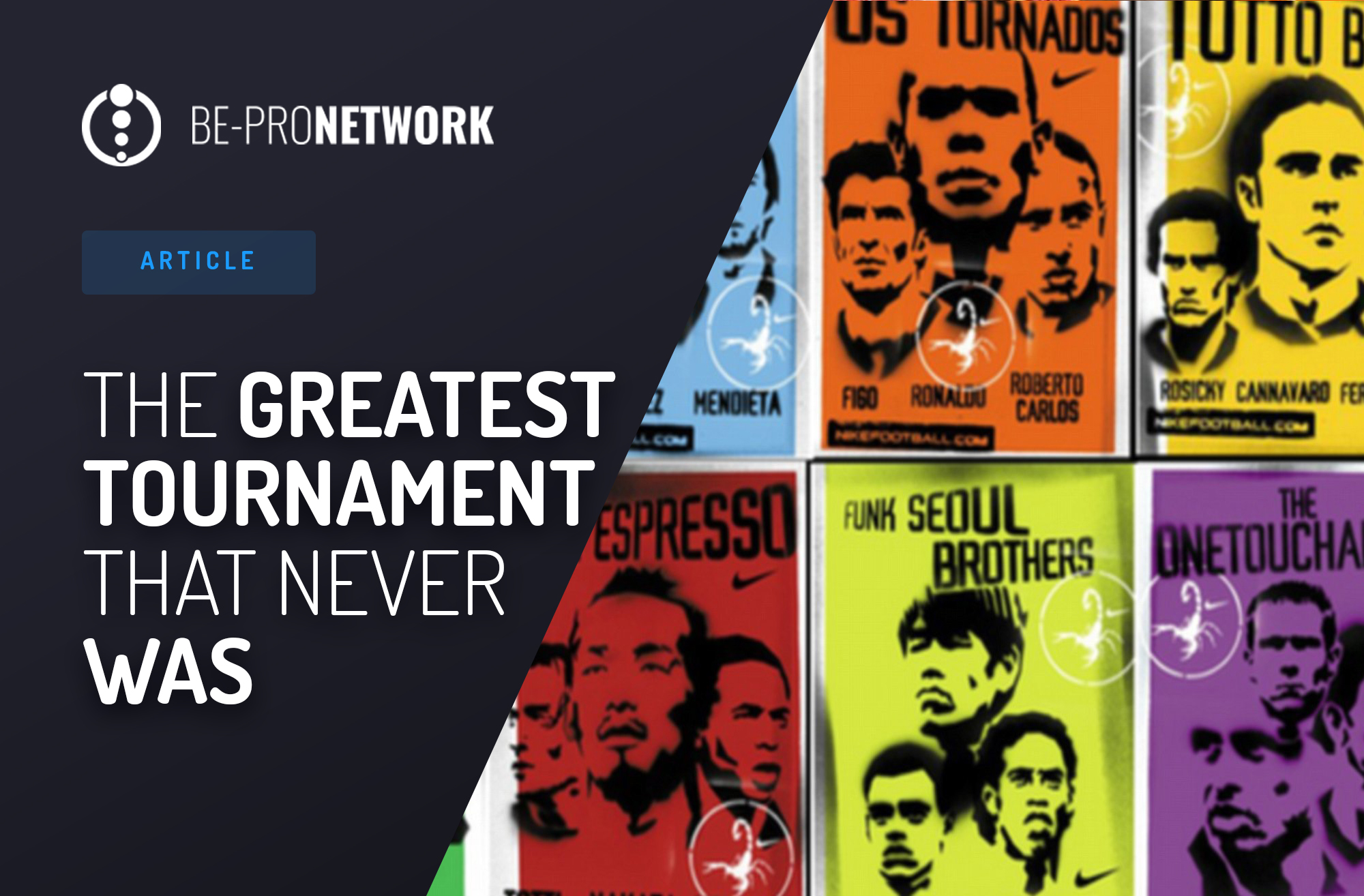 he influence of Nike on the World Cup was thrust awkwardly into the spotlight in 1998. The largely anonymous role of Brazil’s Ronaldo in the final is still something of immense conspiracy. Rumours abound of Mário Zagallo withdrawing the player following a breakdown, only to be forced into reversing his decision by Nike.

Manufacturing both the Seleçao’s kit and Ronaldo’s boots, some went so far to suggest the sportswear giant would sever ties should their poster boy be omitted from the main stage.

Fast forward four years and the company’s power could be seen more than ever. This was the beginning of the mass wave when players moved away from the standard black boots to bold colours, many adorned with Nike’s trademark Swoosh. It was something hammered home during the pre-tournament advert, with an estimated $100m budget and 24 elite players recruited to captivate the world.

This advert in question was directed by former Monty Python star Terry Gilliam, with such production values evident from the very start. A container ship pictured amongst rough seas on a misty night houses eight teams, ready to hold a so-called Secret Tournament. Despite being a precursor to the spectacle of South Korea and Japan, the sporting behemoth would go on to produce something arguably as memorable as the finals.

The format was simple: eight teams of three would battle out inside a caged pitch, with only one rule: “First goal wins,” announces Eric Cantona, enlisted as MC-referee, to the assembled talent. His harsh French tones cut through the silent ship, accompanied only by the faint murmur of electronic music. As the former Manchester United star seeks to drop the ball through a hatch into the pitch below, the tune becomes ever louder, ever more familiar.

Waiting to square off below are the opening trios. The first is Triple Espresso, comprising of Francesco Totti, Hidetoshi Nakata and Thierry Henry. Up against them are Patrick Vieira, Paul Scholes and Ruud van Nistelrooy, otherwise known as Onetouchables. It is a mouth-watering array of talent, and as Cantona triumphantly slams the grate above and Elvis Presley starts singing, the Secret Tournament is underway. 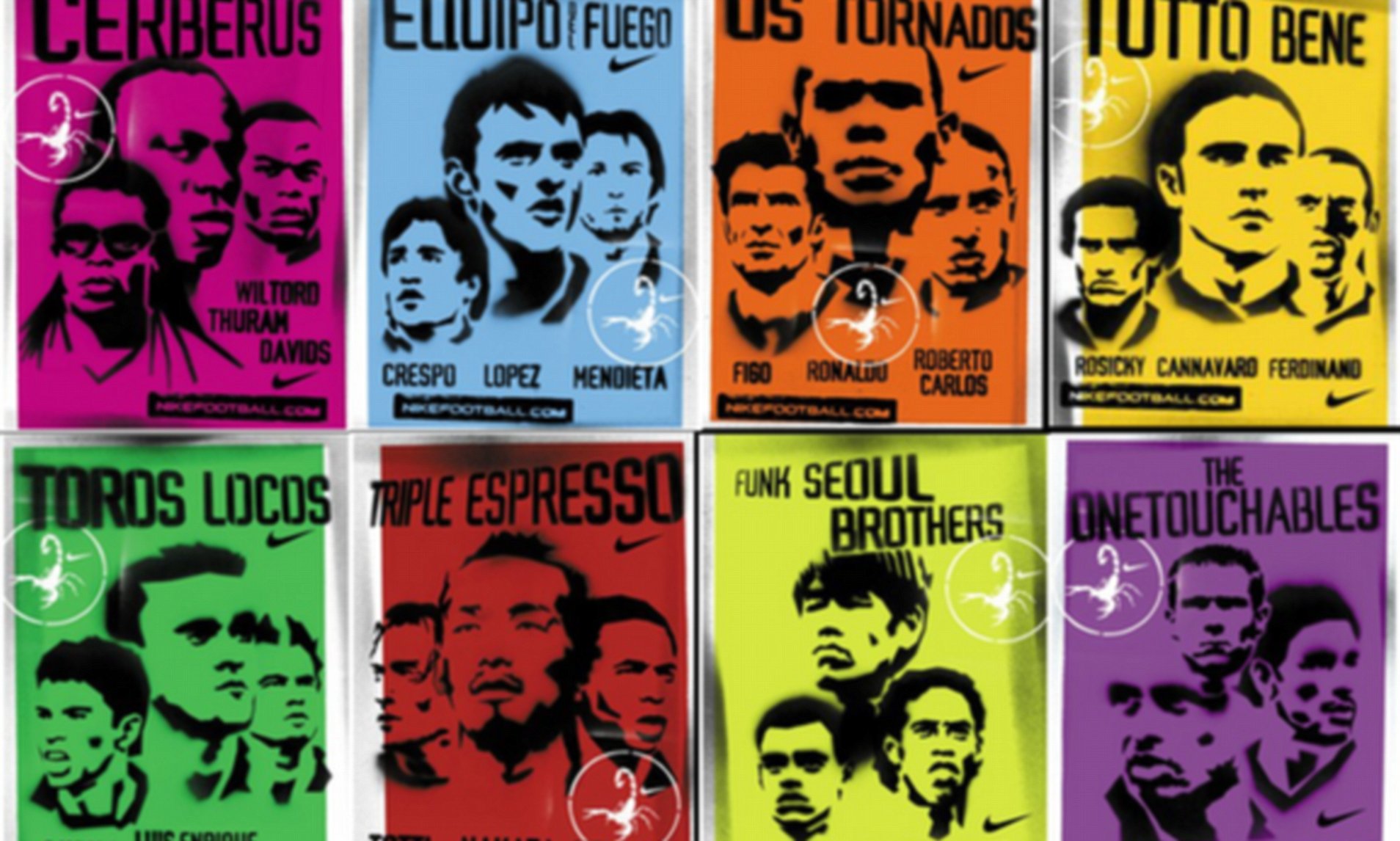 Totti kicks off by backheeling the ball to Nakata, who volleys at the open goal. Denying him on the line is a sliding Vieira, with Scholes then putting in a firm challenge on Totti. Winning the ball and approval of his adjudicating former teammate, Cantona lets out an energetic shout as he spreads his arms. Henry then imaginatively kicks the ball off the wall, with Totti flying in to scissor kick home, rippling the chain-linked net. It sounds action-packed, but that entire sequence lasted 13 seconds.

On the sidelines, Edgar Davids and Lilian Thuram can be seen smiling eagerly, knowing they are next on. Joining them to form Cerberus is Sylvain Wiltord, with their opponents the Toros Locos of Freddie Ljungberg, Javier Saviola and Luis Enrique. Cerberus’ defensive focus makes this game scrappier, with Davids and Thuram combining to pin Saviola in the corner. Nevertheless, there is still flair aplenty, with Ljungberg rainbow-flicking Thuram before Wiltord nets the winner with a diving header.

The third match is true to form, with two of the world’s best defenders in Fabio Cannavaro and Rio Ferdinand combining with Tomáš Rosický in Tutto Bene. Meanwhile, Equipo Del Fuego boast a fitting Spanish speaking contingent of Claudio López, Gaizka Mendieta and Hernán Crespo. A scrap ensues after Ferdinand grabs onto López’s shorts, gaining a disapproving shake of the head from Cantona, before Mendieta breaks free and slots home. In response, Crespo climbs up the wall, his delight matched only by the fury seen as Ferdinand throws the ball into the ground. 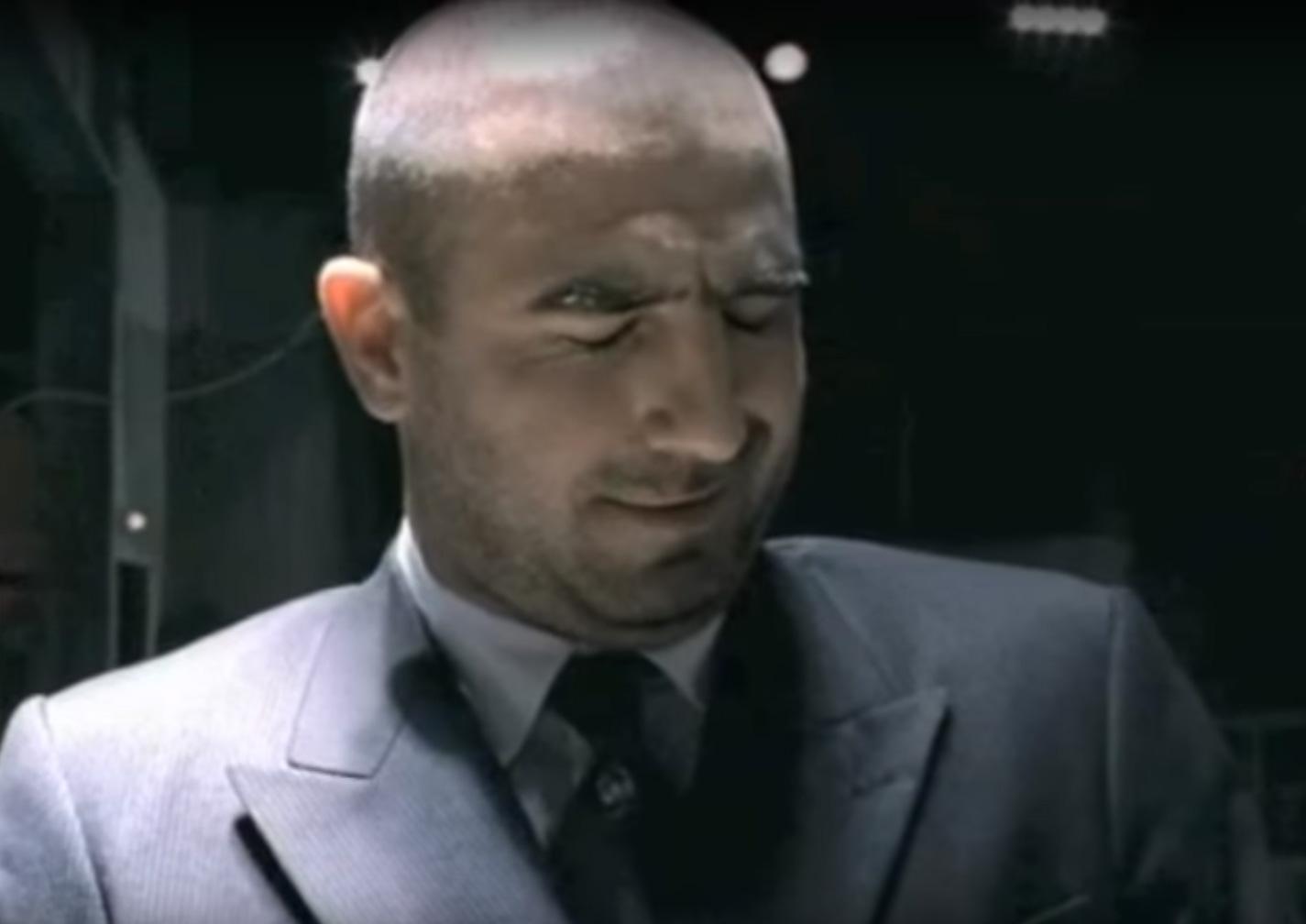 If the advert was special when released, like a fine vintage of wine, it appears even better when viewed now. The line-up in the final match is like a roll-call of past stars, as Luís Figo, Roberto Carlos and Ronaldo (Os Tornados) take on the wonderfully named Funk Seoul Brothers of Denílson, Ronaldinho and Seol Ki-hyeon. Ronaldo hits the bar early on, Denílson dices with danger close to his own net and Ronaldinho is just Ronaldinho. There is just something indescribable about the whole affair.

In the end, Os Tornados triumph as Roberto Carlos ends a game full of trickery with an inventive scorpion kick finish from the halfway line. The camera pans to show his visible surprise, as the Brazilian rises to his knees to lift his arms aloft. He cockily nods his head as a disheartened Denílson trudges off. Cantona, meanwhile, is delighted, dancing around the girders above with his scorpion topped cane like a deranged Bond villain who has just witnessed the sweet death of 007.

Into the semi-finals, the individualism continues, with Cerberus playing Triple Espresso whilst Os Tornados take on Equipo Del Fuego. In the first match, Henry manages to utilise his renowned pace, sprinting to play a wall pass to Nakata, who nonchalantly volleys in. Meanwhile, Os Tornados dispatch of Equipo Del Fuego in the other semi, with Figo proving the match-winner. The Portuguese flicks over a stranded Mendieta to backheel a volley that proves too good for the futile slide of López. Cue the samba dance celebrations from the soon to be Real Madrid teammates, who qualify for what Cantona dubs “La Grande Finale”.

The trios enter the cage for one last time, pictured in a boxer style face-off as Roberto Carlos tries to unnerve Nakata. This is matched by the sound of footsteps one more time, as Cantona’s every stride becomes audible in the hull of the ship. Obviously this is all acting, with the advert filmed at a studio in Rome, but to the viewer it matters not. Here some of the finest players of their generation will square off, in a contest one wishes could have only taken place in reality. 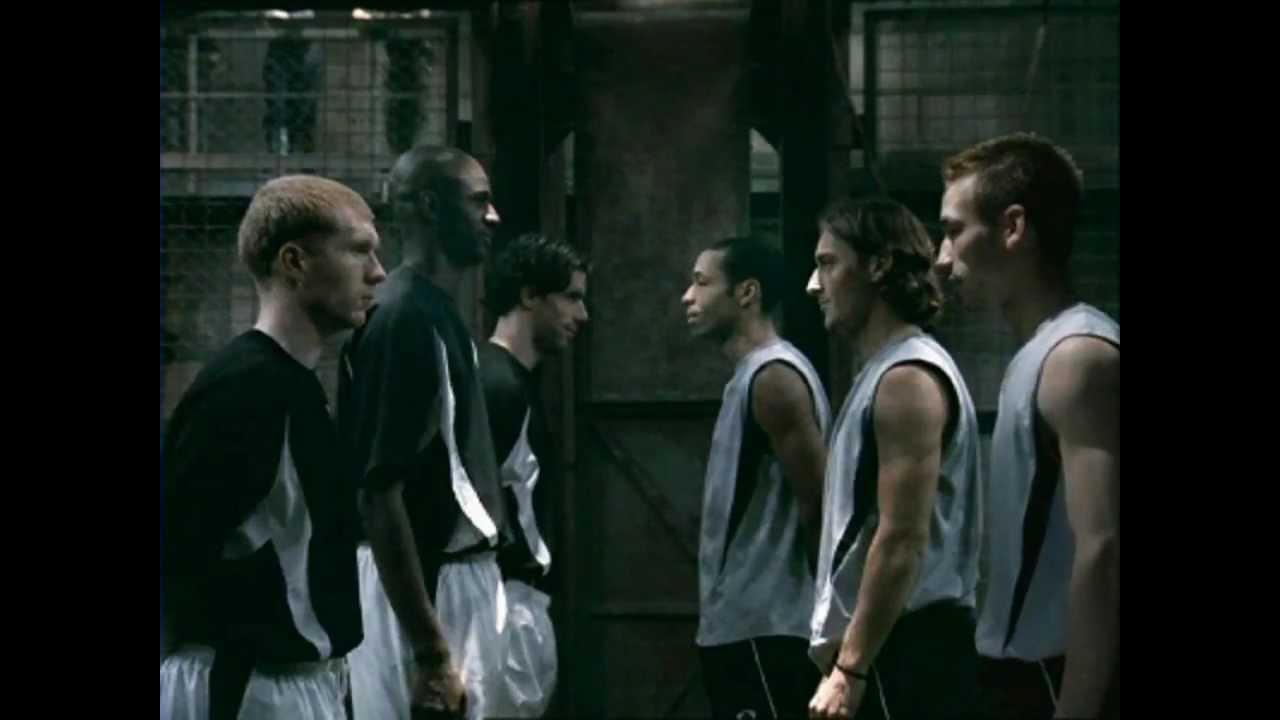 Such is the invention in attendance, just as Cantona goes to drop the ball one more time, we see Henry whisper something in Totti’s ear. The Italian precedes to bend down to tie his lace, drawing a confused frown from Ronaldo. As the ball descends, Henry begins to run up, meeting the metallic silver orb with his head. Redirected like an out of control satellite, it sails over the head of Ronaldo, with Roberto Carlos frantically backpedalling. These attempts prove in vain, with the ball nestling in the back of the net with a satisfying clink.

Pandemonium ensues on the sidelines, as the vanquished teams celebrate a moment of genius. Figo is less than happy, especially once Cantona has laughed away his protests with the gleaming smile one expects to witness shark-cage diving. There is one final twist to come, with a tannoy announces “the losers go home” as Os Tornados are seen falling into the sea. Thankfully they would be seen again, as too would the Secret Tournament.

The final six would return for a rematch some months later. This time an open deck replaced the cage, with scoring changing drastically to first to 100. Goals are seen flying in, including Roberto Carlos recreating his famous curving free-kick against France. Predictably the score reaches 99-99, with Figo salvaging some retribution by volleying in the winner. Unfortunately his joy would prove short-lived, with the ball bursting the rivets on the boat, meaning all the players have to swim for the shore.

Whilst being designed solely as an advert to sell their boots, prominently seen in Henry’s winning goal in the original, there is a deeper cultural impact from Nike’s campaign. Most notable is the soundtrack, a remix of Elvis’ A Little Less Conversation by Dutch DJ Junkie XL. The song garnered so much attention from the ad it went to number one in nine countries. Nike also ran several real-life versions of the tournament across the globe, which were partaken in by an estimated two million children.

As for the players in the advert itself, all 24 have now called time on what were extremely memorable careers. It would be illogical to include the Secret Tournament as a highlight in the footballing lives of Figo, Henry and Ronaldinho given what they achieved in the game. Then again, nostalgia doesn’t normally do logic.