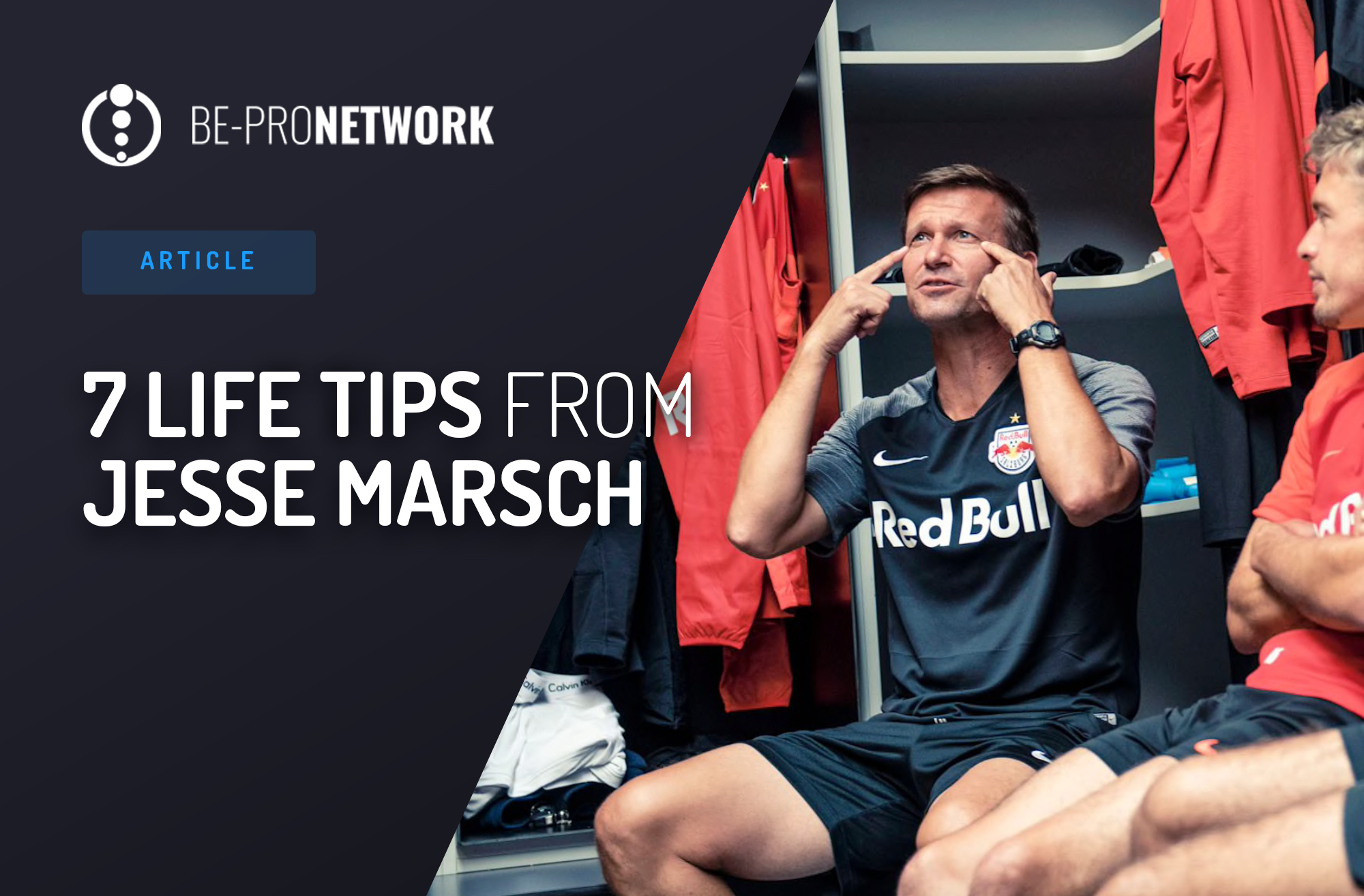 This is how Jesse Marsch has been perceived since taking over as coach at FC Red Bull Salzburg in July 2019.

The 46-year-old is the first American to coach and win a game in the Champions League.

Examples of Marsch's leadership came during the Champions League, where defending champions Liverpool were twice brought to the brink of defeat by FC Red Bull Salzburg.

The video of Marsch's motivating half-time speech at the game in England ("This is not a f***ing Freundschaftsspiel!") went viral and gave us insight into the philosophy of the Princeton graduate from Wisconsin.

Now, for The Red Bulletin, Marsch goes one step further and explains what's behind some of his most important quotes of leadership. 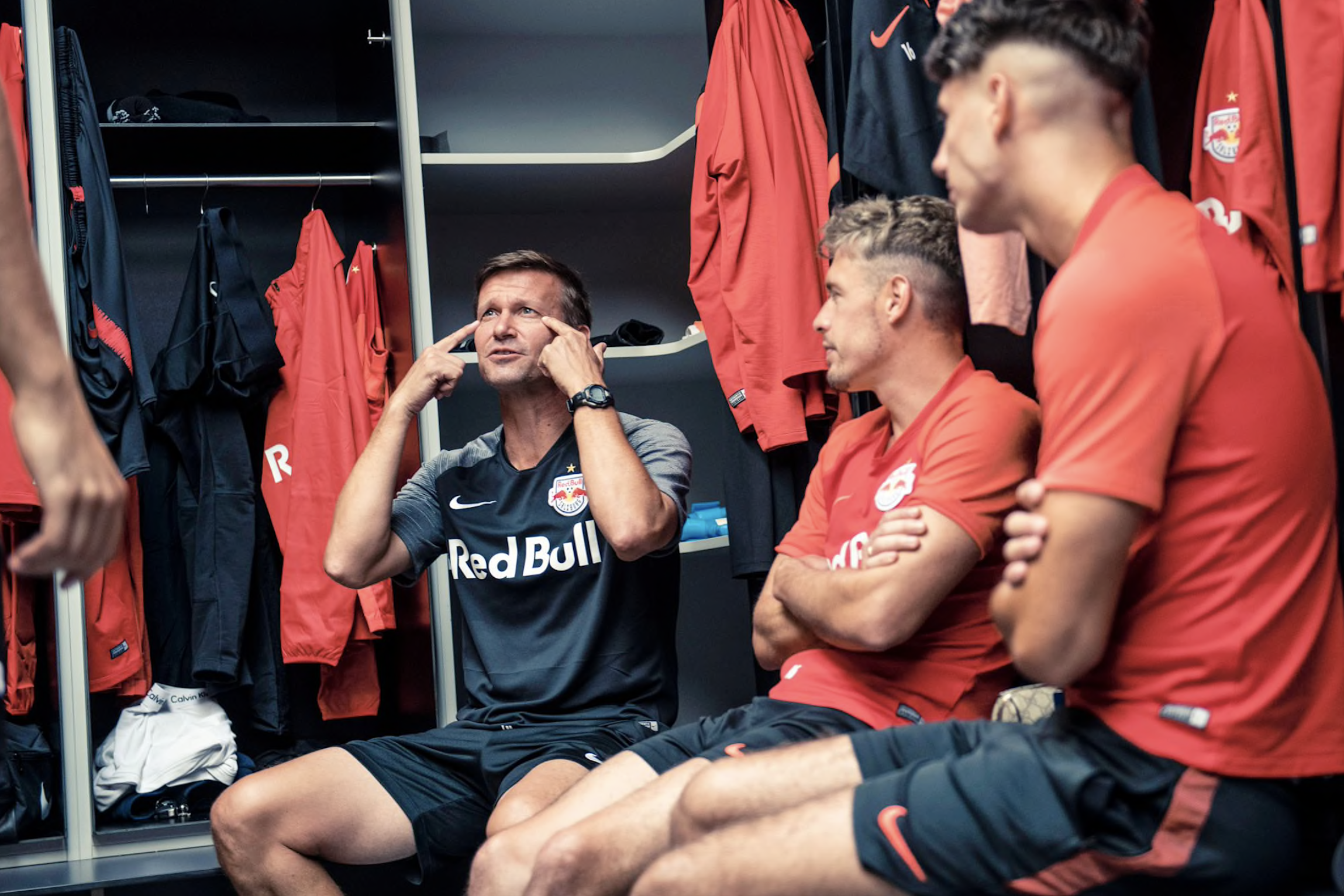 1. It’s not about talent, it’s about mentality!

"In football, the right mentality determines success. Diligence, energy, concentration, working hard every day and having fun – that describes the environment in which we can get the best out of the players.

"And I'm not talking about results. If you only think about results, you forget the steps on the way to success. I pay close attention to our players, in training, in the cabin, in the canteen. How well do you know yourself? How well do they support each other? How hard do you work for each other in the field? What development has everyone made?

"If these questions are answered, the results will come. We have a clear idea of our identity, both football and human. It doesn't come from me, we worked it out together. We know who we are, what our common goal is.

"After Kobe Bryant's death, I spoke to the team about his development. As a basketball rookie, he was one of the most hated players in America; talented but a daredevil, arrogant.

"Kobe, however, had an incredible development in his game, his mentality, his personality. With his determination, his attitude to train in the morning, late in the evening and on days off, he won the respect of his teammates and opponents – and scored 60 points in the last game of his career. I told the players: if we want to win titles, we have to have this endless determination." 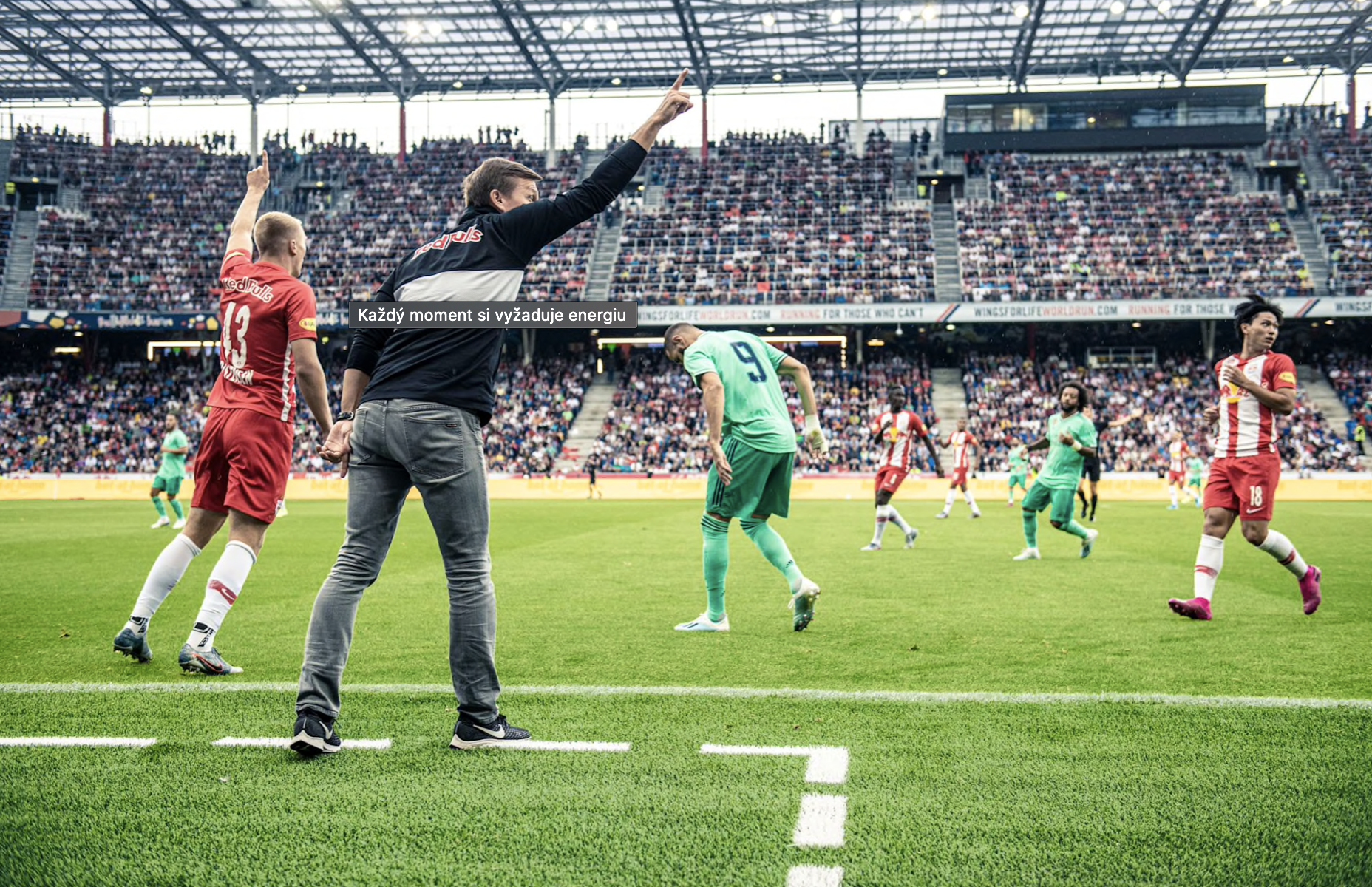 2. You have to be online all the time!

"That means thinking ahead on the pitch and being prepared for every situation. Players have to live in the now, not indulging in other things or previous mistakes.

"There's enough time to learn from our past, but on the pitch we have to put all our energy into the upcoming action. I concentrate on my energy, body language and communication every day. I can't be bad for a day or a moment. Because that would mean that everyone can take a day off. No!

"We always have to be ready. I am aware that it's not that easy for the players. Everyone is different, has concerns that burden them. But that's what we're there for as a team. If we think someone is not in a good mood, we help. It's not critical to always have an answer.

"Talking alone often helps. This requires emotional intelligence, even from the experienced players. It's important to keep an eye on the whole team and develop a feeling for one another."

"When I was still a player and a coach asked me my opinion, I felt all the more connected to the group. I live out this experience today.

"When a player comes to me with an idea, a change request for training, I often say: "Great, let's do it!"

"This way you feel valued and important enough to make decisions. And everyone has to do that all the time. The coach is not on the pitch during a football game. In American football you can easily announce every move. This isn't possible in our sport. I can make changes, have a half-time conversation, or change the tactical system. But they have to play. And decide on the pitch.

"If the players need me, that's bad. You need each other. My goal as a trainer is to create an environment in which they no longer need me.

"A good leader must not make his team dependent on a man, especially not on himself. And at some point the coach loses the job anyway. Once I'm gone, the club and the environment have to be stronger than when I started." 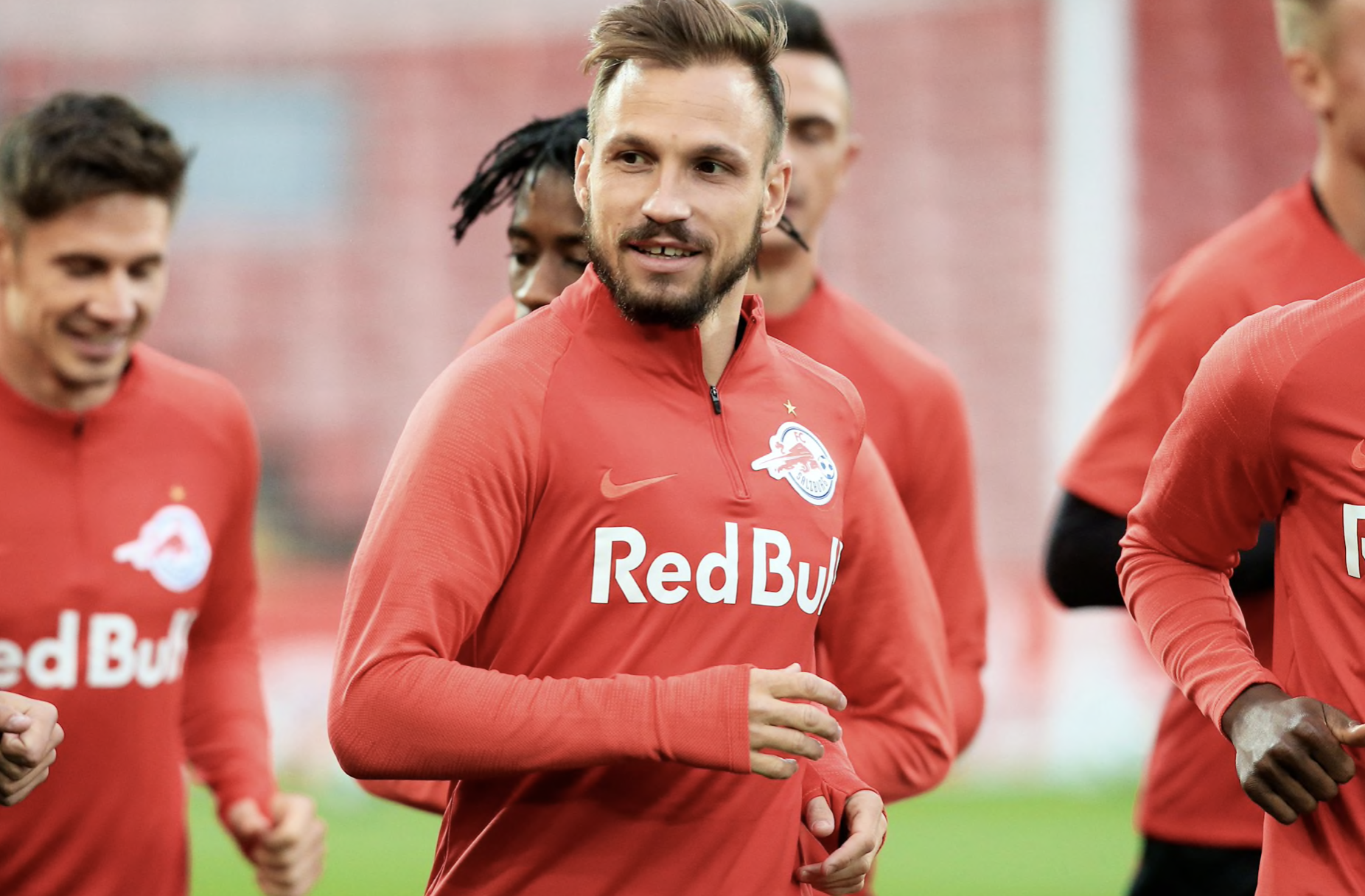 4. A chip on your shoulder

"It's a big topic for me. I come from a non-prominent US state. Nobody believed that I was good enough as a player or as a coach. That was motivation for me. The more doubts the better. Too many compliments are not good. A lot here in Salzburg is very positive, the club, the team...

"But no one believed in us before the start of the Champions League. Many good players had left the club. It was a good opportunity for me to show people that they were wrong.

"I have often spoken to the players about this: If someone believes that you are not good enough, it's an attack on you. But don't be intimidated by this attack, use it as motivation. If a player doesn't succeed on its own, we have to help out as a team. So far, it has worked well."

"This phrase means two things to me. First, physically: cut everything, give everything!

"Second, the attitude for every day: We come to the training centre and give everything.

"In the square, when walking out, at meetings, it doesn't matter. And when we go apart again, we all have a good feeling because we've done everything and developed. Then we can also be tired, take a break, regenerate physically and mentally.

"This daily intensity leads to the pressure that constantly takes you to the next level: react even faster, make better decisions, expect even more from each other. It's like a pressure cooker. That's the way for improvement and performance in our lives." 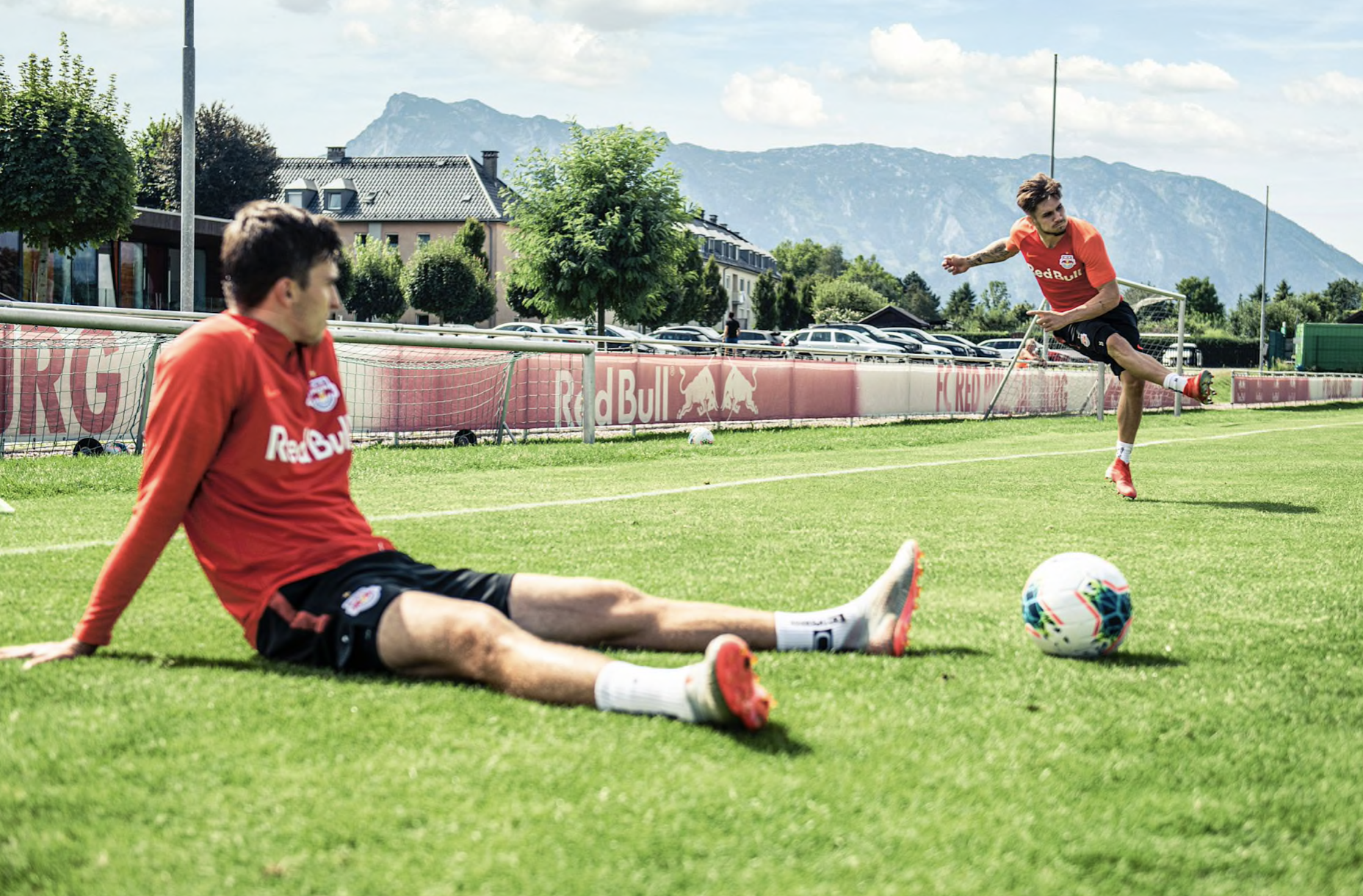 "Before the game in Liverpool we said: "Fortune favours the bold – luck helps the brave."

"But that's just a saying. It is one thing to address a topic and another thing to fill this topic with life. The half-time speech at the 1-3 score in Liverpool (the viral video of Jesse Marsch's "This is not a fucking friendly game, this is a fucking Champions League game" was nothing new.

"To be brave, to be stronger – that's what we talked about during the whole season and even more intensively the week before the duel.

"After the experience of the first half, the speech in the cabin was a kind of trigger. Now we were ready. It was a crucial moment. Brave, active and being aggressive is always better than being passive.

"I don't regret much in my life, but if I do, then it's the things I approached too passively. Boxers say to an active attitude: "Let's go down swinging!" If it's not enough at the end of the day, like at 3-4 in Liverpool, it's not bad because we bravely opposed each other." 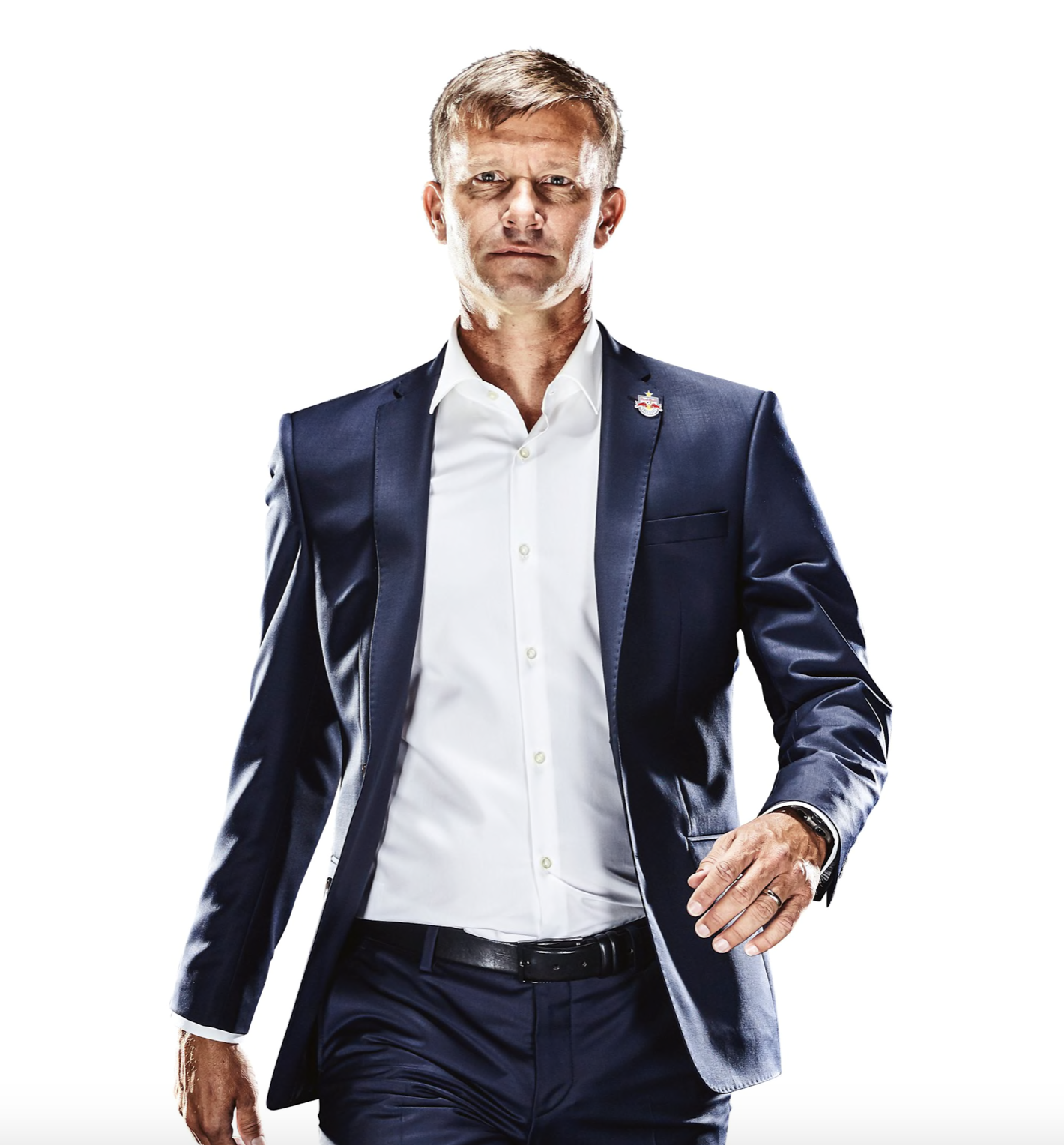 "I've often heard coaches say: "Play flawlessly!" I've never said that and will never say it. No matter to whom. It has nothing to do with football. We don't have to make mistakes all the time, but it's the only way for development.

"If everything goes perfectly, it's easy and we don't learn anything. It's easier for me to accept the mistakes of others than my own. I expect a lot from myself. If I make a mistake, for example when it comes to a substitution, a system change or a training session, I struggle for a long time – but I step in front of the team and assure them that I'll do better.

"The players have to understand that I also make mistakes. That's human. And I'll show them that when I speak German. My German is not good, I make a lot of mistakes. But I've developed, I speak much better than six months ago. It's a great feeling. That's power. That gives you confidence. And that's the same with football."